Another  interesting building is the Kassiopi Castle , located on the northeast coast of the island  formed a defensive triangle together with Angelokastro and Gardikiis.The Castle had  an important vantage point and strategic significance, because was used for observations on the Corfu channel that separated the island from the mainland. The exact time in which the castle was built is not known , but bronze coins were found from the reigns of Byzantine emperors Maurice(582-602 AD) and Basil (976-1025). Unfortunately in 1081 the castle was captured by Count Bohemund of Taranto at the time of the First Norman invasion of Greece, then the fortress was occupied by Alexios I Komnenos and in 1386 was captured by Wenecian who decided to destroy the castle because of its strategic importance. The perimeter of the castle has a length of 1.073 km and is of quadrilateral shape with 19 strong towers of alternating circular. The interior of the castle has an area of 35.177m2,that has survived to the present day . The main gate is supported by two strong towers one to each side. Each of the gate towers has two floors. Such conventional equipment would have included ladders, siege tower. The Castle was empty for long time,that result in making it ruins, as well as the fact that local residents used the castle’s stones for own homes .However, is worth to see this historic buildings because of its  history and beautiful view. Kassiopi Castle is considered one of the most imposing architectural remains in the Ionian Islands . 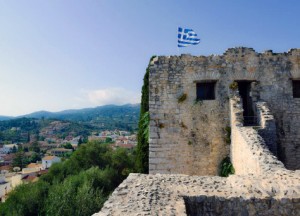